Advantages to automated IoT edge solutions are so clear, it is becoming harder and harder to make a case to wait for the “network nirvana” promised by providers investing in 5G rollouts and related NB-IOT solutions.

While there is no question that the massive improvements in speed and convenience of simply connecting to a 5G service to the Internet, where security is increasingly being provided embedded in the cloud (eliminating the need for traditional gateways and other edge equipment), there are network protocol options available now which are less expensive but equally useful, whether LoRa, SigFox, Weightless, and more (as listed on the chart below). 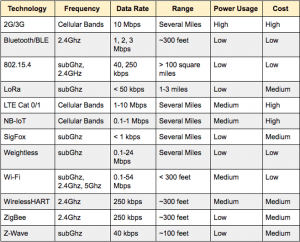 Smart City projects (or those which are very much like Smart Cities, including those on military bases, college campuses, corporate industrial parks, and large public venues), many funded by public/private partnerships, will continue to boom in 2020.

It’s an exciting yet challenging time for the designers, engineers, developers, and consortiums to keep up with growing demands for expansion and reconfiguration, particularly as the ROI is now proven, moving proofs-of-concept into mass adoption. The key to creating disruptive value is in IoT and Industrial IoT automation, supporting systems which require far less “human intervention” and far more benefits (predictive and prescriptive maintenance for example) and for these “closed loop” systems to work, the edge needs to be tuned for performance and availability.

Market & Markets estimated the Edge Computing Market size will grow from USD 2.8 billion in 2019 to USD 9.0 billion by 2024, at a CAGR of 26.5% during the forecast period, and in this same report said the Smart Cities segment will drive the most need, with rising demand for low-latency processing and real-time, automated decision-making solutions, and the need to address and manage exponentially increasing data volumes and network traffic.

The Market & Markets study also reports that the platform segment, where ClearBlade leads, is expected to grow at a higher CAGR during the forecast period. With an increase in edge devices and data centers, service providers and enterprises need access to software capable of controlling operations at the edge.

We have implemented and are in the process of implementing connected systems in industries including Smart City, rail transportation, oil and gas, supply chain and logistics and more – and we never needed 5G to do so. Why?

It depends, of course, on the use case, but in many cases the majority of compute can be done at the edge, in near real-time, collecting and storing data locally, on small form-factor servers and gateways that are ruggedized for even the most extreme outdoor conditions. This does not mean this data isn’t valuable when shipped to the cloud – it is tremendously valuable, but isn’t needed for runtime, rather is ideal for collecting data from many endpoints and locations to analyze and report.

This is where edge platforms, connected with more local and less expensive and power-hungry transmission networks, makes so much sense. With a proven platform like ClearBlade’s, organizations have visibility into everything required to support automated systems, including localized AI algorithms and such, with orchestrated combinations of physical infrastructure, a range of edge devices, and gateways that connect them to any number of networks.

These platforms must be scalable (not just technically, but economically) and open enough to work across the range of sensors, equipment and network protocols – including 5G.

With 85% of IT decision-makers saying they have at least one Internet of Things (IoT) project at proof of concept, purchase, or use phase, the adoption of IoT technologies is escalating rapidly. According to IDC, there will be 41.6 billion connected devices globally by 2025.

The explosion of data generated by these devices represents a tremendous opportunity for organizations to gain powerful insights and performance gains – everything from predictive analytics to robotics, automation, and predictive maintenance.

By distributing the processing load and moving it closer to the edge of the network, where the data is generated, edge infrastructure technology collects, processes, and reduces the exploding amount of data being then sent to a cloud or data center. We don’t need 5G to do this. We’re doing it every single day, millions of times a day, in ClearBlade’s installations along.

Done right, edge solutions that take advantage of localized networking, minimizes latency, conserves network bandwidth, and makes it possible to collect and secure a wide range of data and move it faster to the best location for processing.

By pushing key processing functions to the network edge, rather than forcing data to constantly travel to the cloud or data center and back, edge computing also enables IoT devices to function even when there is limited connectivity to a cloud computing network.

Will we welcome 5G with open arms as it becomes available, city by city? We will, just as we have welcomed all other networking solutions for many years. The greatest value 5G will bring is choice – but it is not the only choice.

On Oct 12, 2022, we announced the release of ClearBlade Lagoon.  The Lagoon release is a major step forward for ClearBlade with the launch of our new product IoT Core being made available to the general public.  In addition, key capabilities for the IoT Enterprise and IoT Edge are now in the hands of developers.  As always, Intelligent Assets is easier and faster for new […]

IoT Infrastructure That Stands Against Chaos by Aaron Allsbrook

Google Cloud shocked the industry last week when it announced the retirement of its IoT Core service.  Why did it make such a major change?  They didn’t say why, but we know the Google Cloud is the only cloud still growing at over 40%, and we know they are only interested in workloads that scale and are profitable from the cloud perspective.  What do we […]

The sun has always been a reliable source of energy, and with the advancement of solar technology, it has become an increasingly popular source of renewable energy. Forecasters predict that the U.S. alone will add 21.5 GW of solar capacity in 2022. These estimates are more than half of the currently existing capacity and exceeds the 15.5 GW added in 2021, according to the Financial […]

We are beyond excites about this strategic investment from @SC_Americas! #IoT #IIoT #Edge # EdgeAI #IoTCore